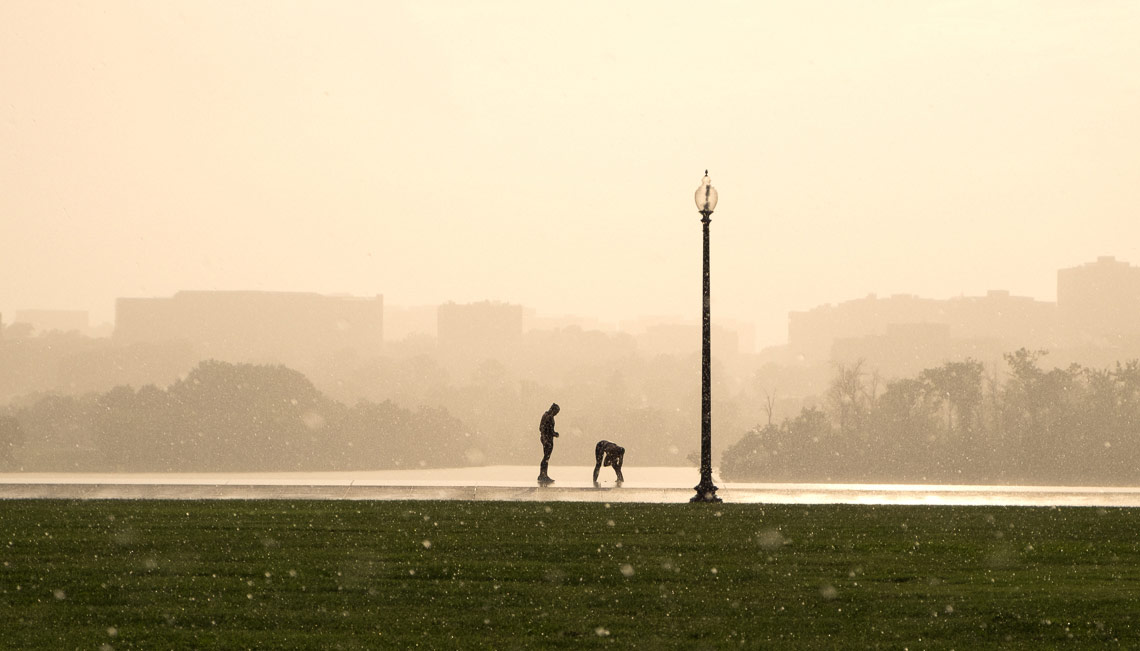 Workout in the Rain

Last week we went to the Citi Open, an exciting tennis tournament with high-level players in Washington DC. Unfortunately, it started to rain after a couple of hours, and we decided to leave early. As soon as we arrived at the car, the light rain turned into a thunderstorm with heavy rainfall. Visibility was poor, and it took a while to get through D.C.

Almost out of the city, at a traffic stop, I saw this couple working out in the rain. If that is not dedication, I don’t know what is. I opened the car window and made a couple of photos while the rain was pouring in, hoping at least one will come out well.

Post processing was done with Lightroom and Exposure XP 2. This time I selected the Color Films – Vintage – Autochrome – Vignette (soft) preset as a starting point. It fit the mood and color of this photograph perfectly. I only had to tone down the vignetting and the grain to get the look I envisioned.

Tweet
Back in Time Going Forward
Sign up to get the latest updates and earn 10% off your next purchase of $50 or more.
We use cookies on our website to give you the most relevant experience by remembering your preferences and repeat visits. By clicking “Accept All”, you consent to the use of ALL the cookies. However, you may visit "Cookie Settings" to provide a controlled consent.
Cookie SettingsAccept All
Manage consent

This website uses cookies to improve your experience while you navigate through the website. Out of these, the cookies that are categorized as necessary are stored on your browser as they are essential for the working of basic functionalities of the website. We also use third-party cookies that help us analyze and understand how you use this website. These cookies will be stored in your browser only with your consent. You also have the option to opt-out of these cookies. But opting out of some of these cookies may affect your browsing experience.
Necessary Always Enabled
Necessary cookies are absolutely essential for the website to function properly. This category only includes cookies that ensures basic functionalities and security features of the website. These cookies do not store any personal information.
Non-necessary
Any cookies that may not be particularly necessary for the website to function and is used specifically to collect user personal data via analytics, ads, other embedded contents are termed as non-necessary cookies. It is mandatory to procure user consent prior to running these cookies on your website.
SAVE & ACCEPT